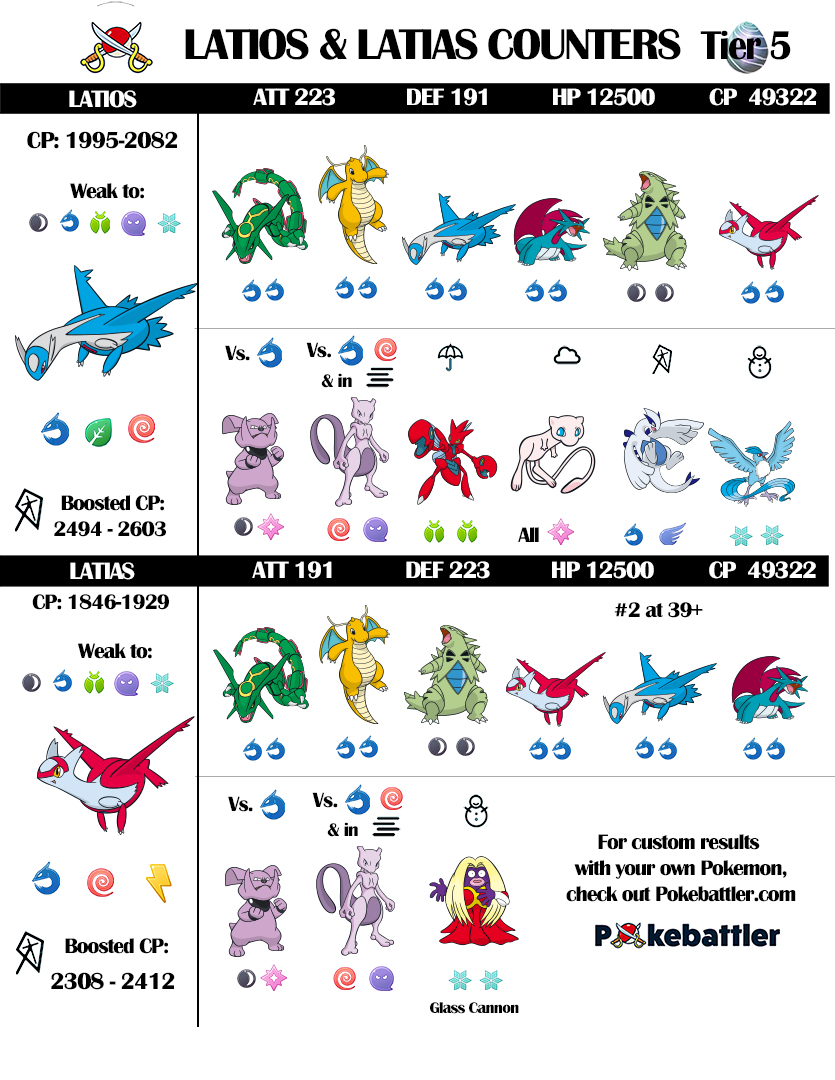 It’s been a while since we’ve done one of these as we haven’t had any exciting new legendaries in a while.

But April 2nd brought two new dragon/psychic type mons: Latios and Latias. I for one find it rather annoying that there are two Pokemon with almost identical names. I’m sure there is some fancy tale behind why they have similar names in Poke-lore. But in reality, it means a lot of Celandro and I (Mrs. Pokebattler) saying, ‘Are you talking about LatiOS or LatiAS?’

But I digress. Although I’m sure we’ll be out with bells on this weekend ready to raid for these two mons, they aren’t SUPER exciting. In fact, we only see one as particularly useful at all.

Latios is a decent Dragon type. Early on in the game, he would have been pretty exciting, joining the ranks of Dragonite as a rare Dragon type. But then we got Rayquaza and Salamance and suddenly he’s not super exciting. He’s about as good as Dragonite IF you like to dodge, as he’s slightly weaker BUT he’s easier to dodge with so overall it’s a wash. He is a decent gym clearer if you have Solar Beam or Dragon Claw. You do NOT want Zen Headbutt for your special move, it sucks. Latios would be a good psychic attacker, except that Zen Headbutt and Psychic are so terrible, Latios barely makes top six versus Machamp.

Latios is fairly easy to trio with low defense and a weakness to dragon types, making it an easy raid for tier 5.

Arrr, thar be dragons on this infographic. And they be good counters against this Latios dragon. Because dragon is super effective against dragon! So power up those Rayquaza. I assume you already have at least one strong Dragonite.

A double dark Tyranitar is your friend because Latios has a weakness against dark. But if you have to choose between dragons and Tyrantiar, pick the dragons. Except in foggy weather if that exists where you are.

Here’s a shocker: Granbull is useful. Random, we know, but a dark, fairy Granball is STRONG against a double dragon Latios. You never know what mons can end up useful eh?

Vs. Dragon, Psychic and in Fog:

Mewtwo doesn’t quite make a generic counter as he’s not strong against a Latios with Solar Beam. But if Latios is dragon and/or psychic, or if it’s foggy outside, he becomes much stronger, but still not Raquaza strong.

Got a Mew yet? Lucky. Now you can use him. At least if it’s cloudy, and he has a fairy special move, and you don’t already have 6 dragons. I have NO idea how many TMs it may take to get that. But yeah, if you do, you might want to use him. He’s still weaker than the dragon counters, but he does barely make the list.

Windy weather gives a dragon/flying Lugia a nice boost into being a useful counter. If you managed to get a shiny you can bust him out!

Here’s an easy way to differentiate between Latios and Latias: Latias is useless! At least in the current game meta, Latias is too tanky with attack stats it’s the weakest of the 5 dragons. Latias would make a good gym defender, but we can’t put legendaries in gyms! Pft. But we gotta catch ’em all right?

Latias has higher defense than Latios so it’s a bit harder to take down, but still trio-able.

So as these two mons are pretty similar, both being dragon/psychics, pretty much everything is the same as above with two differences: no Mew and swap Articuno for Jynx.

Instead of Articuno, we recommend a double Ice Jynx in snowy weather. She doesn’t make the cut in overall, but she’s a glass cannon and has a great time to win. So if you powered up those Jynx for Rayquaza, you can bust ’em out again if it’s still snowing where you live.

We’re excited about these new raids but we’re even more excited about the new research system and finally finishing our gen 1 Pokedex. (Although Mew isn’t all that useful, and was super complicated to add to our simulator with it’s 350 possible movesets!)