Reshiram is currently in Tier 5 Raids followed by Zekrom and Kyurem!
Galarian Pokemon are coming. See how they work in PVP Rankings and Raids and more!

Underrated Prestigers #5: Beedrill and Furret are among the best allrounders for prestiging 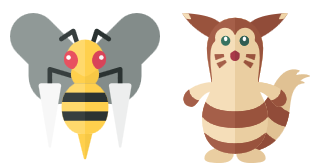 We have to catch Weedle and Sentret anyway for stardust and XP. Everyone evolves a lot of Furret, and those of you that aren’t into power leveling (e.g. being level 30+ and finding the diminishing returns of stardust investments after level 30 not so attractive) can get quite a few Beedrill too, if your biome is “buggy” enough.

The only viable moveset for Furret is Quick Attack / Hyper Beam (the same as one of Raticate’s best movesets), while for Beedrill several movesets are good, just avoid Aerial Ace. Beedrill’s best moveset for general-purpose prestiging is Poison Jab / Sludge Bomb.

Beedrill is Bug/Poison, with its strongest moves being Poison. So its moves are neutral against pretty much everything typically found in gyms, except they are bad against Ground and Rock (so avoid using against Golem, Rhydon and Tyranitar, which anyway have their specific counters). It suffers Zen Headbutt (Snorlax, Blissey) and Psychic (Blissey) but it resists Dazzling Gleam (Blissey as well).

Beedrill, with its 169/150/130 stats (P = sqrt (D x S) / A = 0.83) is more attack-oriented, i.e. quite high DPS but not particularly resilient. The stats ratio is in the same range as Parasect, Venomoth, Sunflora and Machoke, and it’s still bulkier than Arcanine, Exeggutor, Charizard, Victreebel or Primeape at the same CP.

According to my CP efficiency calculator, here is the relative performance of Beedrill and Furret (in terms of combined time and revive efficiency) against some of the most common gym sitters:

These rankings are done with a 0%-70%-30% dodge setting, i.e. dodge only specials and more likely to dodge if using a non-Super-Effective fast move (because it doesn’t delay the “Defender used Charge Move” message).

Beedrill with X-Scissor is a great prestiger against

Exeggutor with a Grass charge move, due to its 0.64x resistance to Grass and its 1.56x Super Effectiveness against Grass/Psychic.