Reshiram is currently in Tier 5 Raids followed by Zekrom and Kyurem!
Galarian Pokemon are coming. See how they work in PVP Rankings and Raids and more! 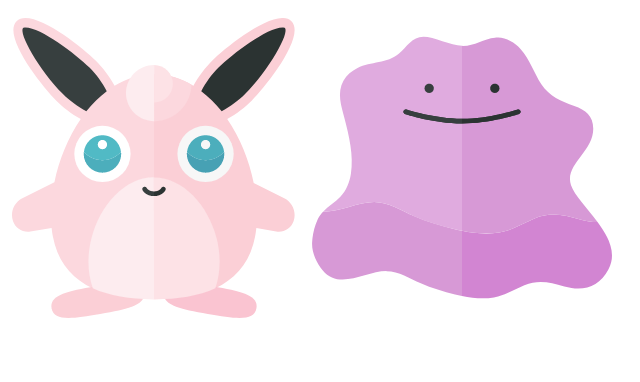 I made a simple calculator that shows how Wigglytuff is the 9th-fastest and the 5th-most revive-efficient prestiger against Ditto.

– No attacker switching after Ditto’s transformation.

– Ditto copies the attacker’s moveset, Attack and Defense stats, but keeps its Stamina stat. However its new CP is calculated from the attacker’s stats, including Stamina.

– Everyone has 7.5 IVs for all stats. Even better results are obtained with a 15/0/0 Ditto, because Ditto keeps its IVs.

– The fastest prestigers, due to their high Att/Def ratio, are Gastly

– The most revive-efficient prestigers, due to their high Stamina (which gets replaced by Ditto’s Stamina) are Blissey

, but they are slow due to their low Att/Def ratio.

has an Att/Def ratio of 1.7, so it beats itself quite quickly, but it has almost 3x Ditto’s Stamina, so Wigglyditto will faint very soon.

Pound is a must-have, because it’s neutral (not NVE) and fast, so Wigglytuff can use it much more often than Wigglyditto.

– Pound / Hyper Beam: recommended against high-level Ditto. According to Pokébattler, the first, deadly Hyper Beam can be fired with 88 seconds on the clock, before Wigglyditto can use its own.

– Pound / Dazzling Gleam: Not suitable against a level-30 Ditto, but a level-13 Wigglytuff with £/DG can defeat a level-26 Wigglyditto with 7 Pounds, 1 Dazzling Gleam and 5 more Pounds.

(1) For the best moveset per species, the source is my Choose Your Prestigers v8.0. For type effectiveness, I just typed my estimated values manually.